It's okay: I had two eyes, anyway.

There are probably a lot of things that are pretty sucky.  One of those things is being eaten by hobos, and another is inexplicably going, well... blind.  If you've figured out that this is a post about being blind, because otherwise I'd be dead, and in the bellies of one or several hobos, give yourself a back rub.  And if you can give yourself a back rub, give yourself another back rub because apparently you're really flexible, and that's worth celebrating.

So last week, walking back from the coffee shop, I noticed something: my left eye had stopped... um...  providing vision, and had embarked on a new career path - being a source of unholy pain.  You know what it's like when one of those teeny tiny little eye-seeking bugs get stuck in your eye?  That's what it felt like, only the bug felt like it was the size of a medium-sized coal miner, and it had located a particularly good seam of bituminous coal on the far side of my cornea. 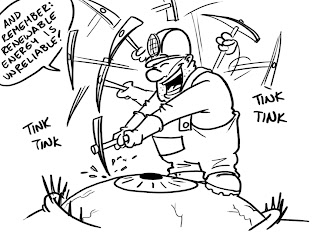 After stumbling the remaining half mile back home, I spent a good 10 minutes debating whether it was easier  just to make a new entrance/hole into my house, since the constant stream of tears made it almost impossible to find the dumb keyhole.  But eventually, random chance prevailed, and I floundered my way to the bathroom, ripped my contact lenses out and spent the next 6 hours flushing with saline solution.*

* At this point, my "Shoulder Mother" (like a Shoulder Angel, but more persitent) is requiring me to say it was more like 3 minutes, but it FELT like 6 hours.  Now my Shoulder Mother is calling me a big baby.

This did absolutely nothing.

So I decided to do what anyone suffering crippling face-pain would do: Go to sleep.  My agony-addled brain's thought process went something like this: "Hi, Matt.  It's me, your brain!  Sorry I've been so distant lately, but I've been thinking.  I KNOW, right?  Yeah...  Anyway, check out this sweet plan of action:  We are very tired, and if we go to sleep, whatever is devouring our eye will probably eventually get frustrated and find something else to do, like maybe eat a less vital organ, or get bored and die, or maybe even go clean something.*  Thank me later!  Brain out."

* This, incidentally, is also my philosophy for pets, children and law enforcement officers.  It also has a very low success rate.

Unbelievably, this well-crafted plan failed completely.  Largely because certain things are not conducive to sleep, and among those things is a burning desire to rip parts of one's face off and run them over repeatedly with the car.

And now it was time to go to the hospital.

Here's when I had a realization: I have never been to a hospital.  I don't know where they are, I don't know how they work, and I definitely don't know the minimum threshold of facial pain required to gain admittance.  Even though I have a little card from the union that says I can go to hospitals and I don't have to sell any children to pay for it, I've never used it, and I have no idea how it works.  I suspect it might be like one of those cards you get stamped at Subway for a free sandwich: 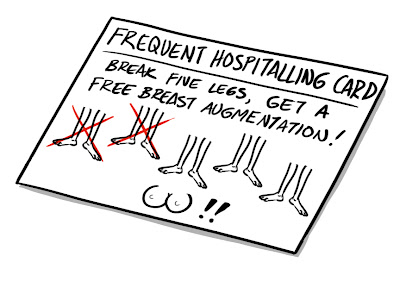 But thanks to some coaching from my sister, I ended up at an Urgent Care clinic instead.  For those of you who haven't been, "Urgent Care" is somewhat of a misnomer, because the staff apparently regard nothing as "urgent," except possibly "Rabid bears attached to patient's ass area," which might be considered a "Reason to hurry a bit"  Also, they seemed to provide relatively little to no care.

Okay, in fairness, I take that back: The doctor* did put some drops in my eye, which didn't relieve any pain, but DID turn my eye bright orange, which I guess might have been considered progress, if I was going for that kind of thing.  I was a little more focused on getting the BURNING ASS OF SATAN OUT OF MY EYE, so I probably didn't express as much gratitude as he might have liked.

*I assume.  I couldn't see much at this point, so it might have been the janitor.  Or maybe even a street mime.  But if he was a mime, he was a crappy one, because he kept being all talky and stuff.

So while trying to develop an appreciation for my pretty, newly-orange eye, which still burned, the doctor/janitor/mime handed me a prescription to get filled "At any pharmacy, most likely," which was very reassuring, from a medical/janitorial/mime-ial point of view.  At this point I had as much business operating a motor vehicle as I had defusing a nuclear device, but I drove my whiny, leaky self to Walgreens.  I'm relatively certain I killed fewer than 7 pedestrians on the way, which I counted as a pretty big success.

Oh, I should probably also mention that I'd been awake for about 30 hours at this point.

Anyway, this is when I came to the conclusion that Walgreens should implement a "Shop here if you've been awake for a stupid amount of time" policy, because suddenly, everything seemed like a must-have item.  Garfield Brand Extra-strength Colon Cleanser?  Might need that!  A Do-It-Yourself Neck-Bleaching Kit?  Why, you never know!   Prosthetic nipples?  I will take five, THANK YOU SIR.  In the end, though, I mainly ended up swaying deliriously in the corner and drooling on stuff.  After 30 minutes of this, the pharmacist leaned over and said, "Hey.  Stop drooling on our shit, weirdo.  Also, we're all out of that stuff you want.  Here's another store.  We called ahead, and it TOTALLY has that shit.  Go there now."

This was a lie.

And it was also a lie when the next store told me the exact same thing.

And it was still a lie 2 stores later when they told me the exact same thing again.

At this point, even with their fire-sale deals on enema shoes, I was really starting to hate Walgreens - a hatred which probably would have been better expressed had I been less focused on not looking stupid by dying at Walgreens, which would have made for a lousy tombstone: 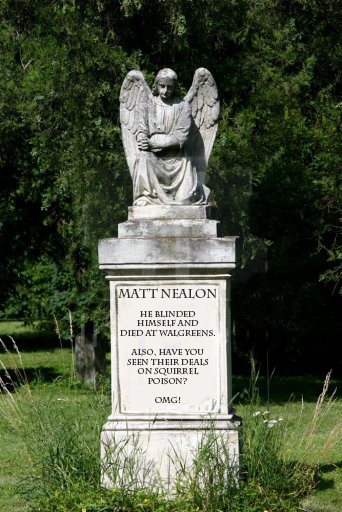 But thankfully, this last store hadn't gotten into the "Lying to Matt Game." And so, after reviewing my prescription/post-it note, they handed me the world's tiniest, most emasculating bottle of medicine, with instructions along the lines of "Apply two drops to your little pink panties, whiny girl."

I emptied it into my eye, and instantly, the pain... was gone.  Holy crap.

So, in the end, say what you will about modern medicine, but apparently horrible, Gozer-level eye-pain is no match for two drops of clear liquid from a teeny tiny bottle.  This was so seriously emasculating that I decided to wear an eyepatch for a couple of weeks just to feel manly again.  And I also put some on the cats, because they go for that kind of thing. 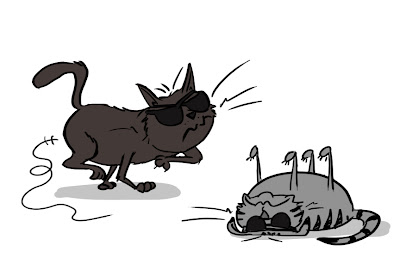 Manliness:  Important to cats.
Posted by EnjoyTheSauce at 12:30 AM 10 comments:

And So We Begin. Again.

People keep asking me if I have a blog.*

So it's possible this is because of the "ASK ME ABOUT MY BLOG" tattoo on my face**, but when slightly punched, they insist its because I, as a prime example of a less-than-prime human being, spew out ridiculous, slightly depressing observations about life, the universe, and... Steve.  And I should write that crap down, because as we all know, the world is desperately crying out for another narcissistic doofus scrawling crap on the interwebs. 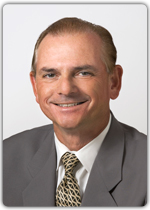 I think what's most important to know, right off the bat, is that I am a terrible person.  (Actually, in Acting for Animators class, I was once required to say the phase "I am a terrible person," and I was told to say it "as if I actually believed it."  I totally aced that class.)  But I've made my peace with it, because in order to be funny, you have to be awful.  So I will be awful.  And you will be amused.  And if you're not amused, I will still be awful, and you'll be a big unamused jerk.

Most funny people are terrible people, or at the very least, seriously fucked up.  (I mean, maybe we should all be doing a collective face-palm here for not steering Hitler toward a comedy career.)  Regardless, one reason is that people whose lives have... ahem... deviated from 2.5 kids and a dog tend to have better stories.  And another reason is that normal, unfunny people like to hear dirt about weirdos whose lives are more fucked up than their own, so they can feel better about themselves. 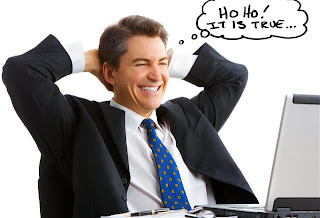 In other words, the Venn Diagram for Funny People vs Fucked-Up People looks like this: 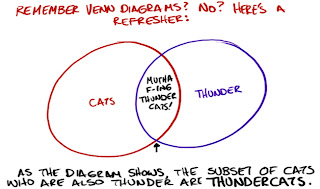 So Funny People vs Fucked-Up People: 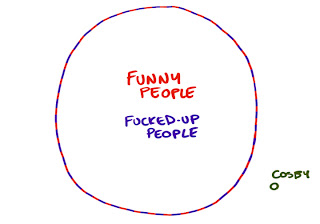 I drew this myself.  We can all thank 4 years of art school.

THEY ARE THE EXACT SAME.  I have proved it with MATHS.  Or at least charts.  Which is probably more or less the same thing.***


So there you go.  Now we can all move forward and enjoy my inane rants together, and I'm certain everyone will be WAY TOTALLY better for it.


* This has actually happened exactly never.
** Not true.  It's actually on my crotch.  Don't make decisions when you're drunk, kids.
*** The sound you hear is my mother, weeping over the thousands she spent sending me to engineering school.
Posted by EnjoyTheSauce at 1:45 AM 3 comments:

Owing to an almost shockingly short attention span, I've decided to end my previous endeavors and start all over again!  (Except breathing and sleeping and eating.  I will continue those.)  I have no idea what exactly this blog is going to be.  There will probably be a lot of whining, and a lot of talking about my cats, and a lot of stuff that reads like Nyquil fever-dreams.

Just so we're clear.
Posted by EnjoyTheSauce at 10:34 PM 3 comments: